Shopping Cart
Your Cart is Empty
Quantity:
Subtotal
Taxes
Shipping
Total
There was an error with PayPalClick here to try again

Thank you for your business!You should be receiving an order confirmation from Paypal shortly.Exit Shopping Cart

It has been an exciting year for me and I wanted to send a big THANK YOU! to all my 2010 clients/friends!  If you are a new client I hope I exceeded your expectations and for my beloved repeat clients I want to send my hugs to you because you have become more then just clients you have become a special part of my life!  Every lovely person I get to create on gives me a special blessing to learn, grow, and perfect my craft.

Every year my work has gotten better from the conventions and workshops I go to but when I implement tips and tricks I've learned with my style on your families and friends we create memories!

I invite you to submit a testimonial on my page or we can design T-shirts, mugs, bags and more with pictures of your event on my wensite.

Every now and then when I get on the news, show, editorial or blog I may need a few models and I appreciate you for providing them when I call!

To my special Annual friends THANK YOU so much!  Every year becomes more special then the last as we get to become more then just clients/entertainer but friends.

"Making the world more colorful one person at a time!"

BTW check out my calendar and reserve your parties so I can guerantee your day as I book up months in advance!

Come check me out on these upcoming dates this week:

Happy to be Alive!

On my way to GA Aquarium Saturday January 3rd, I hydroplaned, life flashed before my eyes hit a concrete wall and survived.  Yet the only thing I was thinking off after I limped out of the totaled car and knew I had no broken bones and notified my family was to go to work at the aqauarium so I could buy a new car.  Now, I don't know if that is dedication or if I am just plain wierd.

On Saturday, May 10th, hundreds of motorcyclists from across Georgia will unite in the spirit of caring and giving to make a powerful difference in the lives of 20.8 million men, women and children living with diabetes.

Ride To Live was established by Atlanta endocrinologist and avid motorcycle rider, Dr. Victor Silverman, as a way to combine his love of the open road with his passion for helping people living with diabetes.

Last year, nearly 1,000 motorcycle enthusiasts joined our wonderful sponsors to raise more than $250,000 to support the American Diabetes Association�s research, education and advocacy programs. Join us in the fight against diabetes with a full day of police-escorted riding, live entertainment, delicious food, lots of activities and a great time! Register today! 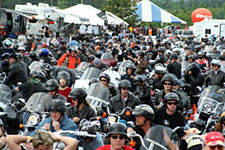 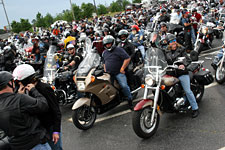 Ride To Live is presented by

Saturday, May 24-25
I will be face painting at Arts in the Park Blue Ridge GA

Arts in the Park Festival

Arts in the Park Festival in Blue Ridge Georgia

Featuring over 200 arts, crafts and food booths, Arts in the Park is located in downtown Blue Ridge City Park. The best in mountain crafts and fine arts, artist's demonstrations, music and dance. Arts in the Park has been recognized as one of the Top 20 Events by the Southeastern Tourism Society. Sponsored by the Blue Ridge Mountains Arts Association.

Join us in Blue Ridge this year for some special events and activities to celebrate the 30th anniversary of the Arts in the Park Festival.

ALIVE! Expo is a two day health & wellness event for the entire family. In just one exciting weekend, you will learn first hand about an alternative approach to health and wellness, get nutritional guidance, watch interactive yoga, pilates and fitness demonstrations, watch healthy cooking demonstrations, listen to lectures from industry health and wellness experts, sample great food, get free massages and go home with tons of free product samples.

Our mission is to inspire and encourage individuals to embrace a life of health, wellness and fitness through awareness of natural and alternative solutions, advanced medicine research, education, nutrition, exercise and lifelong benefits of living a healthy lifestyle.

You can't afford to miss it!

I have a couple bookings coming up so why don't you come out and visit them.

Wednesday, March 26
YAY!!  Got a call from Georgia Aquarium and they want me to be their contracted Face Painter for spring break!  So all I have to do is wait for the contract to be emailed...

Thurday, March 27
Waited ALL day for the contract...finally got the email and it said we went with someone else.  So I sent a nice email and thanked her for considering me but I know she needed more then one painter but if the people she hired needed another face painter for them to give me a call and of course I was crushed.

Later...I found out she wanted me to be a part of the team and I ended up going to work there anyway and at a better rate.  Instead of only being spring break they want us there this Saturday.

Saturday, March 29
Went to GA Aquarium was supposed to work from 3-6 but by the time the other face painter left I only worked an hour but it was a good learning day to find out where everything was and pricing of my competitors.

Well, 2008 started and is going very well, moved from an apartment to a house with a huge backyard and front yard which the kids love....and got a puppy to help them enjoy it.

I have some bookings coming up this weekend.  One being at Apache' Cafe  along with DTLR.  I will be body painting 8 models.

Bonecrusher's album "Free" is out in stores which I sang background for 4 of the songs.

The exercise video "Battle of the Bulge" I did with him is coming out February 19, 2008 to a Wal-Mart near you...I mean really what plus sized person wants to see a skinny person exercise when our bodies can't move that way yet.  I know I want to see a person like me (and a growing  US population) exercising so I  did.

I just saved a bunch of money  on GEICO... just kidding  (actually I saved more then that with Liberty insurance)

Thursday, August 30, 2007
It's my 31st birthday and I finally took care of myself for a change, got my nails and feet done, hopefully it doesn't effect the facepainting.  Went to Applebee's for dinner, got 1 present from my bf's mother & sister.  I went to the store and bought my own cake. Got a client call about the sno cone machine.

Sunday, September 2, 2007
My mom took me & the kids to Medievil Times (did i spell that right?) Anyway, everyone had a good time, it's a good thing to see at least once in your life and out of the norm, I lost my voice for a minute from cheering so much.  They give you a lot of food, and all of it was actually really delicious.

Saturday, September 8, 2007
12-4 Sno cone rental from  Kelvin again
4:30-7 Sno cone rental and facepainting for an hour at a  birthday party,  it was  a great party, but  not enough time for all the kids faces.  She  ended up asking for another 1/2 hour which was $25  but I was shorted $10 but it was ok, I just ate it and didn't ask for it, I knew she was struggling just like me and her family and friends were nice and I am a big softy.  I am sooooo tired!!

Sunday, September 9, 2007
My 10 year old daughter cleaned the kitchen while I was sleeping.  She is the sweetest little girl, of course I had to ask my 13 year old to load the dishwasher and all I got from him was a but why? in a whiny voice.  Why are teens like that?  When his birthday comes October 27 he'll ask for a present and I'll say in my whiny voice but why???

Life and Times of a Facepainter

This past weekend was aa waste of money and time.  Being a facepainter, it's sometimes hard.

Friday, I did a school picnic.  As soon as I got there it started storming, rain, lightning, thunder, the works.  Well I knew that wasn't a good start, but I set up anyway, the sno cone machine and all it's parts and set up my facepainting booth in the gym where the picnic was moved to. The contact person was supposed to supply the ice as stated in the contract but that never happened so the sno cone machine just sat there empty. Then, the lights went off and screaming children took over.  I kept calm and talked to the children in my area to keep them calm.  After being there about an hour, they canceled the picnic and I only made $25 bucks.  Sigh!!! Of course this was after I spent $150 on sno cone supplies.


Saturday, I did a fundraiser and paid a vendor fee of $50 it was a good cause but it didn't end up good for me, no one was there, and the contact person didn't tell the new vendor that there was already a sno cone vendor, (this was her first fundraiser and she admitted she didn't know what she was doing but the other person in charge was sick)  So there ended up being 2 sno cone vendors about 5 feet from each other and the contact was no where to be found.  I set up my facepainting booth and all in all I made about $26.

Sunday, I woke up with a cold...perfect ending to my perfect weekend.